The most promising market for Polish exports among non-EU markets is identified by the Polish Economic Institute as the United States. This export sales direction received the best result due to such features as size, high growth dynamics and the value of Polish exports to the US thus far.

Export performance, which has recently been on the rise due to Polish zloty depreciation, greatly improves the overall Polish GDP in recent time. Polish exports increased by more than a quarter in 2021 compared to the previous year. However, this is not an easy target to achieve again this year due to rising production costs related to fuel, energy, and raw material prices, as well as declining consumer demand. An additional factor significantly limiting sales of Polish goods is the shortage of semiconductors and production restrictions in the German automotive industry, for which Polish manufacturers are important suppliers of components.

More than 80% of Polish exports are received by EU member states and the United Kingdom so far. Such a high focus on sales in Europe means that exporters are heavily dependent on the economic situation and demand in a specific region of the world, which is not particularly safe for maintaining sales in the long term. Germany, the largest market for Polish manufacturers, recorded a very low index of industrial production [1] growth in the first quarter of this year, at just 0.6, while Poland exhibited an index of 5.3 (OECD, 2022).

Therefore, the deteriorating economy and falling demand, combined with the problems of the automotive industry and the unstable geopolitical situation in Central Europe, are convincing Polish producers to increase their presence in non-European markets. In addition, the pandemic's severely weakened position of Asian suppliers in global markets, including the U.S. market in particular, gives Polish companies a chance to strengthen their position outside Europe.

On the other hand, in 2020, compared to 2019, the value of exports had hardly changed. Counterintuitively, this seems like good news given the fact that a pandemic had broken out and activity had come to a halt in many areas of the economy, both in Poland and around the world.

According to the latest data covering merchandise trade in 2021, published by UNCTAD, the most important group remained Machinery and mechanical equipment nuclear, reactors, boilers and parts thereof, for which the US is the fifth largest export market. This complex group includes mostly components for industrial manufacturing. One-third of exports in this group form a subcategory Parts of turbojets or turbopropellers. The value of these exports to the United States totaled more than $771 million in 2021, and at the same time accounted for nearly half of Poland's total exports of these goods. 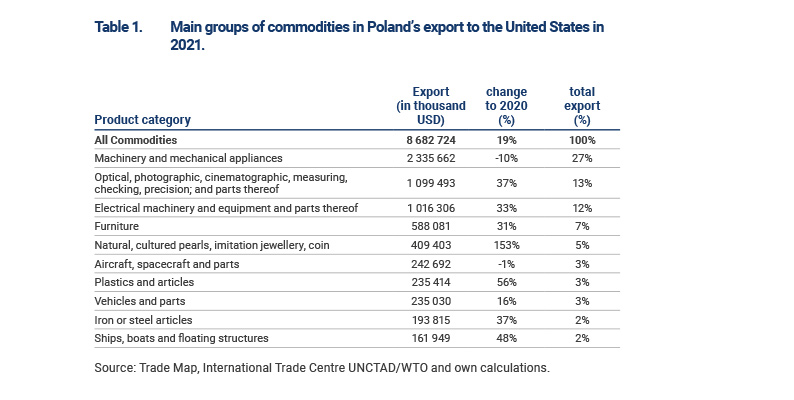 The second major commodity group is Optical, photographic, cinematographic, measuring, checking, medical or surgical instruments and apparatus; parts and accessories. Here, the most important commodity is Hearing aids, with exports of $589.6 million in 2021. The United States is the most important recipient of this equipment from Poland, with shipments to the U.S. market only being larger from Vietnam.

Hearing aids are among the products with high growth rates in total exports. For this assessment, the years 2015-2019 were adopted due to the abnormal situation in 2020, when, as a result of the pandemic, international trade underwent many changes both in terms of directions and industry structure. In the group of goods produced in Poland from the top ten largest sales in the U.S. market, the highest dynamics of annual growth (CAGR) in 2015-2019 were reached by Turbojets of a thrust > 25 kN (CAGR 68%), Articles and appliances, which are worn or carried, or implanted in the body, to compensate for a defect or disability (CAGR 42%) and Hearing aids (CAGR 40%).

In the case of Turbojets, there was a significant increase in sales from 2015, and then in 2020 the value of exports in this commodity group decreased from $107 million to $63 million. However, this was not a decline sustained in the following year, as these exports doubled in 2021 compared to 2020.

In contrast, in the case of Articles and appliances, which are worn or carried, or implanted in the body, to compensate for a defect or disability, the long-term sales increased above-average, but despite maintaining sales momentum in the year of the COVID-19 pandemic, exports of these goods declined in 2021. However, in the case of Hearing aids – since 2015, total exports of this product from Poland have increased more than sevenfold, and by 55% in the last year. Currently, exports to the United States account for 40% of total exports of this commodity from Poland. The significant increase in exports of this commodity in recent years is, according to PIE (PIE, 2022), the result of the location one of the largest manufacturers of hearing aids in the world, the German Sivantos Group. 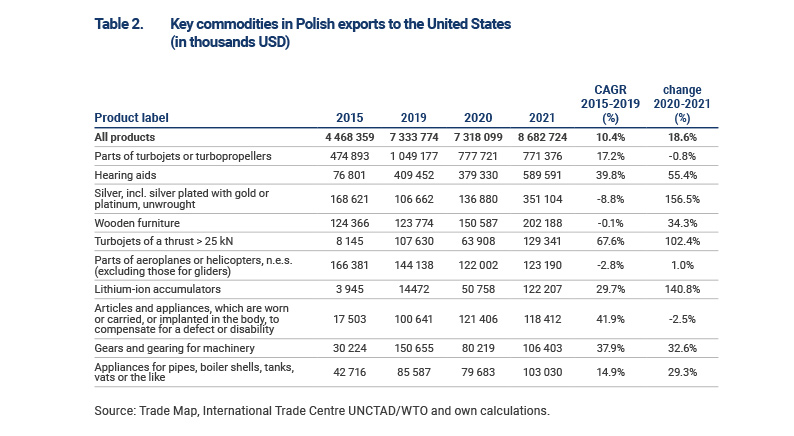 As for the detailed list of products exported from Poland to the United States, the following commodities saw unusually large changes in sales value in 2021 compared to the previous year: Silver (growth of 156%), Lithium-ion accumulators (141%) and Turbojets (102%). In the case of engines, such a large year-on-year increase in exports (2021/2020) was due to a decline in sales the year before, likely due to the pandemic and a reduction in air transport demand. In contrast, the more than threefold increase in silver exports from 2019 was primarily related to industrial demand, which accounts for more than half of silver demand. That demand for silver is positively influenced by its use in the production of photovoltaic panels, a sector which is growing substantially, including in the United States.

Export in the future

Of the 1 261 commodity groups analyzed, 252 Polish goods with high competitiveness in foreign markets were identified. Among them, we also have such goods whose popularity abroad has increased significantly in recent years.

The table below presents the list of 20 Polish goods[2] with the highest export potential to the United States. These commodities were determined based on the percentage difference between the expected and actual value of US imports in 2021 (column [3]), and the revealed comparative advantage index (RCA) in the same year (column [4])[3]. In addition, consideration was given to how the attractiveness of a given commodity in export markets changed between 2017 and 2021 (column [5]). This information is an additional variable indicating how the export competitiveness of the goods for which U.S. demand has increased the most since 2017.

In conclusion, it can be noted that the presented list includes goods from groups that have not been particularly popular in the US market so far (see Table 1). This means that there is a high potential for growth in export sales of Polish goods in the United States, as new competitive goods may appear in addition to those sold so far, for which demand in the United States is increasing.

Among the major commodity groups in Polish exports, we have only one from which goods are in the designated set with high export potential - category 89, i.e. Ships, boats and floating structures (see Table 1), which includes two subgroups with the highest export potential, namely Light-vessels, fire-floats, dredgers, floating cranes, and other vessels and Cruise ships, excursion boats, ferry-boats, cargo ships, barges and similar vessels (see Table 3). At the same time, the value of the RCA indicates that for these products, since 2017, there has been a significant increase in the value of exports of these goods compared to total exports.

In addition, in the described summary, it is clear that there is a strong differentiation of goods both in terms of technological advancement, degree of processing or destination (consumer products, products for industrial manufacturing or construction). Therefore, it is difficult to identify a narrow group of specializations of Polish exports in the future. 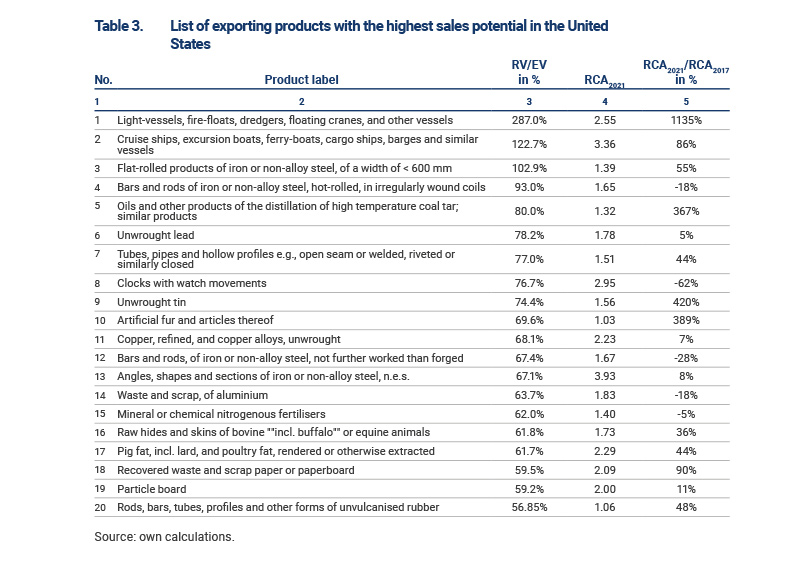 Merchandise export from Poland to the U.S. market has recently been growing faster than exports in general. Undoubtedly, this is a result of the growing interest of producers in non-European markets. High demand resulting from the market size makes the United States a very attractive export destination for Polish goods. The growing demand in the United States for goods that at the same time show high competitiveness in foreign markets indicates the high import potential of this market in relation to the Polish export offer. Thus, it can be expected that clever use of this opportunity by Polish exporters will contribute to an increase in export revenues and give them long-term stability resulting from the diversification of markets.

The aim of the following analysis is to identify the industries with the greatest export potential in the US market. The calculation uses Polish and US foreign trade data for 2017-2021. The data comes from the Comtrade database (source: UNCTAD/WTO) and includes 1261 commodity groups according to the CN classification (Combined Nomenclature) at the 4-digit level.

On the basis of data on commodity imports to the United States, i.e. on the demand side, annual changes in the value of imports (V) were analyzed, determining their average of these changes (k) from 2017 to 2021.

Subsequently, it was necessary to identify commodities whose imports to the United States increased in 2021 compared to 2020 more than the growth trend from 2017 to 2021. For this purpose, the expected value (EV) in 2021 was calculated as the product of k and the actual value (RV) in 2020.

On the basis of the difference between the actual value in 2021 and the expected value, commodities characterized by higher-than-average growth in import demand in the US market were identified. Since the difference between the expected value and the actual value in 2021 for all U.S. imports was 15.5%, this value was taken as the cut-off for separating this group. Thus, this is the first condition used to determine the group of goods with the highest sales potential in the US market.

In the second stage, the most competitive of Poland's export commodities was determined, i.e. the supply side of the assessed potential was determined by the RCA index (Revealed Comparative Advantage), known as the Balassa index (hereafter: RCA index) (Balassa, 1965; Hoen, Oosterhaven, 2006), which is commonly used to specify if the producer (exporter) of product i is competitively relative to a country producing and exporting that good at or below the world average (UNCTAD database). Revealed comparative advantage in product i(RCA>1) confirms export competitiveness in that product. The higher the value of a country’s RCA for product i, the higher its export strength for this product. The above measure is used to assess a country's commodity export competitiveness and comparative advantage by commodity groups (Misala, 2011). 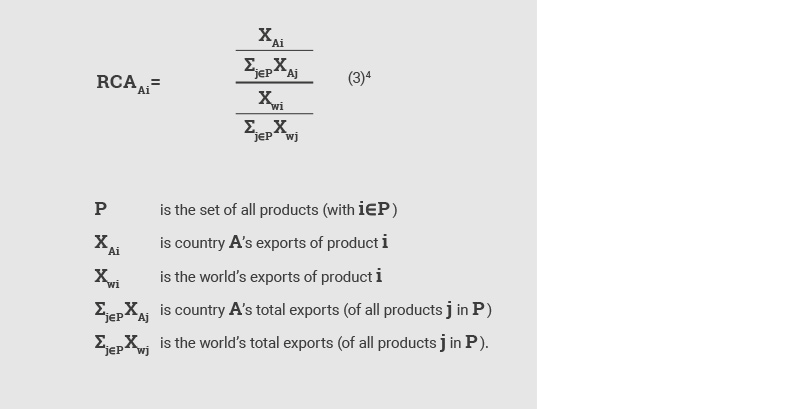 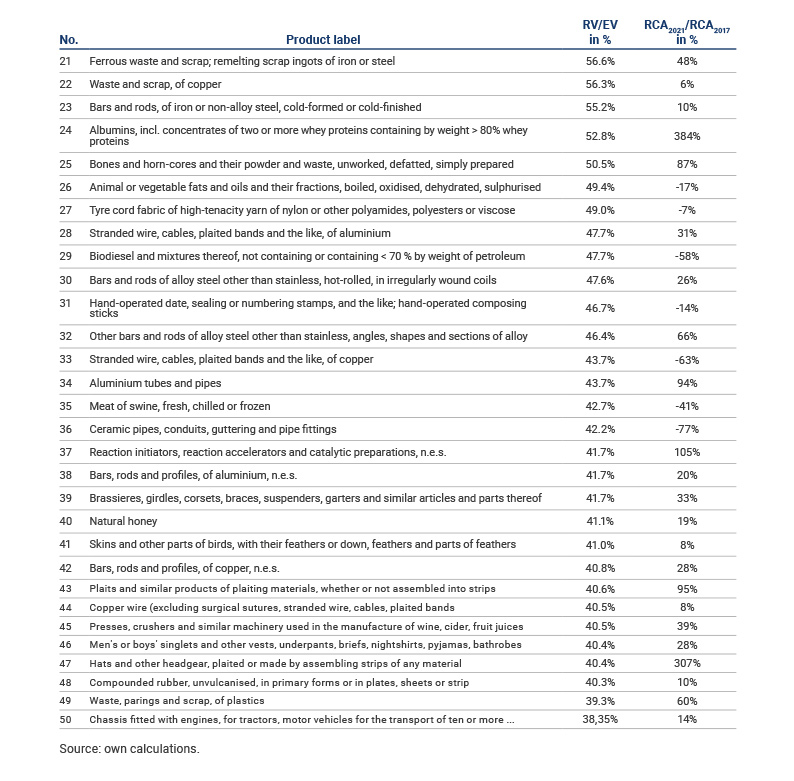 [1] Indices are derived by summing constant price estimates of sales (for the different categories), other operating revenue and changes in the level    of stocks of finished goods and work-in-progress.

Data are estimates of gross product (value-added) for the non-farm goods producing sector.

[3] The calculation method presents the Appendix 1