A greenfield investment is highly valued by the country that the capital inflows. This is because it creates new factors of production, assets and increases the host country's production potential. Such an investment requires the investor to have considerable resources and is a long-term project. Greenfield investments are investments in which a foreign investor decides to conduct its activities without using the existing infrastructure of the local enterprise. However, a new factory's construction is usually chosen by those who have not found a cooperation partner and are convinced about market development possibilities, including internal demand. Experts stress that such investments are the best proof of trust in the host country, its economic and social stability.

Although greenfield projects, by definition, are made from scratch, they can also be created by companies already existing in a given market. Therefore, the source of funding for greenfield investments is the capital flowing into the country or the profits generated (reinvestment).

There are many examples of greenfield projects created with capital earned by a company operating for some time, which had been established as the effects of greenfield investments (3M, IBM, McKinsey, Verifone) and acquisitions (Exide, Mondelez, Philip Morris, UPS). Nowadays, recently popular shared services centers are another venture of an investor already present in our country for some time. The table below presents examples of such entities that have set up operations in Poland due to the dynamic development of the core business by a particular company. 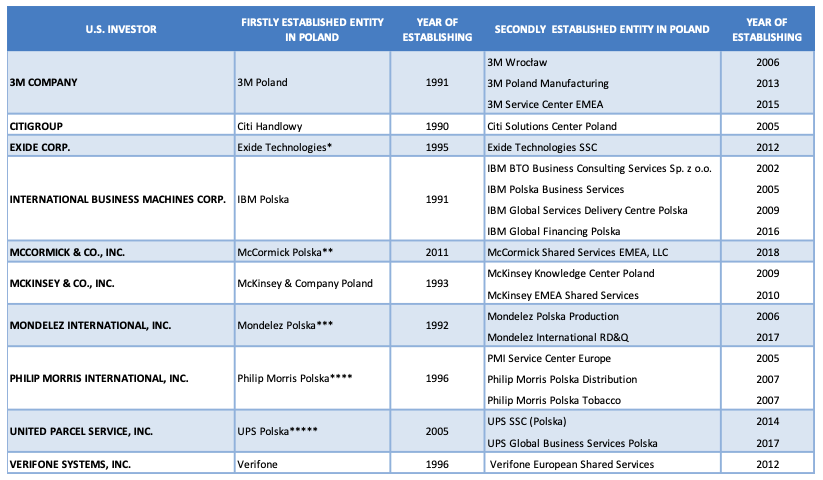 In recent years, Poland has attracted even a third of all new investment projects located in the region of Central and Eastern Europe. New investors link their long-term plans with the Polish market, taking advantage of the Polish economy's competitiveness, especially its human resources and market demand.

Significant incentives for investors are Special Economic Zones. They have traditionally operated for more than 20 years as geographically defined regions offering tax reliefs and infrastructural conditions in return for investing specific capital and employing workers on their territory. The EY estimates that about two thousand entities were set up and generated 350,000 jobs in 14 designated SEZs in Poland from 1995 to 2017.

In 2018, changes were made to the granting of income tax exemptions (CIT or PIT). Thanks to this amendment, it was made possible to take advantage of tax exemptions throughout Poland, and the amount of state aid is determined based on the so-called regional aid map. The strongest support is granted to entrepreneurs making investments in the Lubelskie, Podkarpackie, Podlaskie and Warmińsko-Mazurskie Voivodships. There is the intensity of public support amounts to 50% and is granted for 15 years. The total number of projects permitted under the new PIZ regime stood at 400 in 2019, from 348 under the old SEZ regime in 2017.

A very promising region highlighted by experts from the fDi Market is the Lodz Special Economic Zone in Poland, which stands out as the top zone for Europe in fDi’s Global Free Zones of the Year 2020. The zone also featured third in the global overall ranking. The zone has progressed in becoming a center of Industry 4.0 at the heart of central and Eastern Europe. For the last years, a significant number of permits were issued in the Lodz Special Economic Zone, but there has been no boost in investments in 2020.

Despite the pandemic, last year has once again confirmed the great attractiveness of our country in the eyes of foreign investors. The Polish Investment and Trade Agency (PAIH) has been running 128 projects, among which 71 were greenfield projects.

Poland was a driving market in greenfield FDI into European renewables, which grew nearly 70% last year. The Polish market has attracted a significant number of battery projects since 2015, next to Germany and Hungary.

Foreign companies have created over 6,300 jobs in their greenfield investment ventures run by PAIH and devoted to these projects over $2.8 billion in 2020.

46% of capital expenditures and 38% of new jobs in all greenfield projects were created by US-owned companies which started or expanded their business in Poland in 2020 and were organized with the cooperation of PAIH.

Figure 2. Number of jobs in FDI greenfield projects in Poland, 2020.

US-owned firms are the main contributors in creating jobs in the business services sector, including BPO/SSC and IT services. Nearly 3 out of 4 jobs created by foreign greenfield projects resulted from US investments in Poland. American giants such as Arrow, Hyland, AT&T develop their business operations in IT or shared service centers and Microsoft, Intel – in data centers. 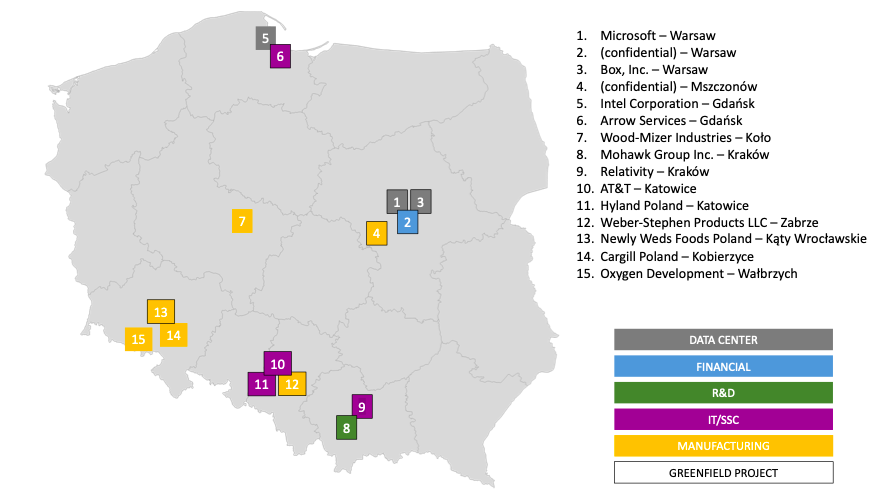 The Katowice agglomeration has become the center of interest for investors starting their business in Poland, such as AT&T, Hyland, or Weber-Stephens, among American investors. These three projects run by PAIH are worth almost 1 billion PLN and have created over 750 jobs. According to the greenfield investment monitor fDi Market, new projects in industrial manufacturing (incl. EVs), business services, and logistics will bring Katowice and the Silesia region in particular back as an attractive, emerging market as it was before the pandemic.

Hyland, headquartered in Cleveland, Ohio, recognized as a leading provider of content services and intelligent automation solutions, announced its investment in Poland in 2020. With plans to open a research and development center in Katowice, the software developer quickly pivoted its in-region recruiting strategy in response to COVID-19 and met its hiring goals by supporting remote hiring and working processes. Last year Hyland hired 40 talented IT specialists, developers and engineers in Poland and plans to triple that number in the coming year, onboarding experienced technology professionals that will propel the organization’s cloud-first vision and develop solutions that support the evolved way of working by providing access to information from anywhere.

Along with non-store retailers such as Amazon and Zalando, American construction group Panattoni has experienced an increase in demand from the e-commerce sector during the pandemic. In 2020, the company announced 29 new projects into emerging Europe, according to fDi Markets. Almost 90% of the company’s 2020 projects were located in Poland, with the remainder situated in the Czech Republic. The city which benefited most from this expansion drive was Warsaw, which has been the destination for 13 projects, Łodź with nine projects, Poznań, Wrocław, and Gdańsk with four projects each.

Relativity, a global legal and compliance technology company, established its presence in Poland in 2015. The Poland office in Krakow has since grown significantly and has plans to employ 300 people by the end of 2021. The office serves as a center of innovation where engineers develop breakthrough technology to organize, analyze, and retrieve data using artificial intelligence and machine learning algorithms. Relativity currently employs 200 people in Poland and has plans to hire 100 more this year, across all of Poland, with its recent and permanent adoption of a hybrid remote-work model. What began as a product innovation center that hired chiefly engineers and programmers and has since become a multi-functional office with a presence of nearly all global departments and full responsibility for critical projects and developed products. The company has nearly 1,300 employees worldwide.

The Weber manufacturing plant is tentatively planned to open in August 2021. Focused on supporting the company’s growing European business, the project is on 21 hectares of land located within the Katowice Special Economic Zone in the City of Zabrze. The new Weber facility will employ around 300 employees across various technical, business, and operational positions.

The Zabrze, Poland manufacturing plant will primarily be used to service our expanding business across Europe, the Middle East, and Africa.  This will make us faster and more efficient in delivering our products to customers.  There is the potential to serve other parts of the world in the future as well.

It is expected that due to the quite optimistic forecasts regarding a slight decline in Polish GDP last year and recovering symptoms in the entire economy in H1’2021, interest in investing in Poland may still increase, among others, due to the domestic attractiveness of the market for foreign investors, American investors considering Poland as the center of their activities on the CEE market.

In the face of the deteriorating economic situation, American companies show remarkable resilience and have not revised their development plans. It proves their high competitiveness and economic potential, which will serve to return the Polish economy to the path of economic growth.