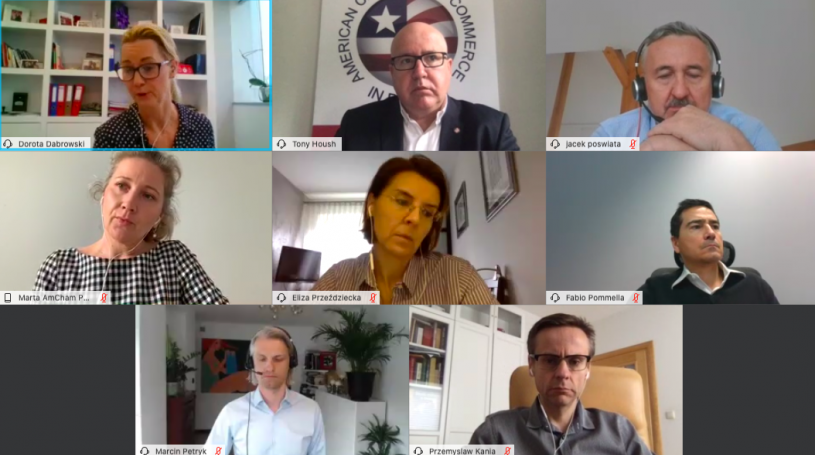 The May Monthly Meeting - a panel discussion on “Doing business in the times of pandemic” was held on May 13 on the Webex platform provided by Cisco.

The global Covid-19 pandemic will have a long-term effect on a number of industries as companies will intensify the use of IT technologies to support work-from-home and work automation, governments will increase their spending on healthcare, while consumers will become extremely cautious with their purchasing decisions regarding services and products— those were the main conclusions delivered by experts who took part in the AmCham Monthly Meeting in May.

Panelist Marcin Petrykowski, Managing Director of S&P Global Ratings noted that because of the pandemic consumer spending decreased worldwide by 60 percent which led many companies to experience liquidity problems. In the months ahead, governments across Europe will struggle to help keep jobs in the economy while healthcare expenses will become a challenge for the European economy. Petrykowski added that the Polish economy had entered into the Covid-19 phase being relatively strong and that the Polish government’s support to the economy has reached 10 percent of the country’s GDP, which is relatively high compared to other EU countries. Petrykowski noted that after the adjustment phase to the effects of the pandemic the Polish economy will take off delivering the growth of approximately 5 percent GDP in 2021. Another panelist, Jacek Poświata, Managing Partner at Bain & Company Poland and CEE, said that healthcare and IT industries will grow as the result of the pandemic, while income disparity will widen globally. What remains a question mark is how consumers will react in the months to come, and whether optimistic attitudes will not wane. Poświata also said that companies will have to adjust to the “new reality” by simplifying their business operations with automation and digital solutions. They will apply new work models, such as work from home. With this accountability will become a key point in building companies’ operational resilience. Another panelist, Fabio Pommella, Chairman of the Board at Whirlpool Polska, said that manufacturing companies will have to reshuffle their workforce by sending huge numbers of its workers to work from home in order to create Covid-19 safe office space for workers who need to use the office. When it comes to the supply base, manufacturers will have to diverse it by bringing it closer to the markets. Pommella also noted the increasing role of governments in supporting the manufacturing sector in keeping jobs during production shutdowns. Another panelist, Przemysław Kania, Managing Director of Cisco System Poland, said that as a result of the massive use of work-at-distance technologies, companies will have to learn to digitize as many work tasks as possible. Company executives will have to learn to use the IT communications internally but also externally, to communicate with their clients and do major transactions. However, with the extensive use of IT in business cybersecurity will become a huge challenge for all industry sectors.

Our first panelist was Marcin Petrykowski who touched on the grim economic outlook for 2020 and the need for a massive transformation and economic setup in the coming years. Marcin mentioned three key issues: the first is the virus which has not reached its peak point in many countries and has pushed the world’s largest economies into near-hibernation. The second is oil, which we have seen a massive price drop where the outlook is not looking promising. Finally, the third issue is the volatility of the economy and how it will keep on swinging. There was mention that no country is immune to the crisis and all countries have been hit equally putting a lot of pressure on credit worthiness, defaults and long term issues. Services have certainly been hit harder than manufacturing, one of the lowest drop levels ever recorded by analysts where the default rate in the U.S. is about 10% and Europe in the higher single digit area. When it comes to SME’s, they certainly got hit harder in Europe and it is still to be determined if they have the ability withstand the shock. Yet, policy makers have been able to design crisis shields to reduce the blow. Forecasting tends to look like a U shape recovery, meaning, there is a huge dip in the short term and an economic recovery should start around the last quarter of 2020 and recovering significantly in 2021. In regard to inflation, we are in a dangerous zone with inflation rising quite high while growth tends to be quite low. For this reason, countries have learned from the 2008 crisis that there needs to be coordination between both fiscal and monetary policies to reduce the economic impact and adjust to the current economic situation. Some sectors will be losers such as aviation and the automotive sector but others will be winners such as the digital sector of the economy. The rise and decline of some industries is due to consumer behavior for both individual and corporate purchasing priorities, where companies will invest more into digital platforms while individuals will not purchase non-essential goods as they re-budget themselves. We can’t fully predict what will happen in the long run as we do not know if the virus will be contained, trade tensions are still present and can potentially intensify due to vulnerabilities and health expenses will change nation’s fiscal policies as well as the EU as a whole. Finally, when it comes to Poland, the country has an A- rating due various factors such as a diversified economy and educated workforce. Poland is going in with caution with a 6% deficit, a net public debt not exceeding 50%, a 3% contraction to its economy in 2020 and 5% growth in 2021. Yet, the country doesn’t come without its package of risks, demography is a big issue in Poland, the significant role of public entities, pressure on EU structural funds as well as labour productivity and the outflow of foreign workers.

Our second panelist was Jacek Poswiata who emphasized that at some point people will be returning to work, yet, the working business model will most likely change. Jacek said that everyone got hit by this impact one way or another, but each company’s short term and long term impact is different depending on the industry. Some industries like airlines got hit hard in the short term but will have a slow and steady recovery in the long run, while other companies mainly the tech sector have a spike in sales now and will most likely have a growth momentum in the long run, for example, telehealth which will benefit in both the short and long run. He voiced to listeners that it is important for you to know where your business stands and adjust to the long term effects in order to survive and recover with minimal impact. It was mentioned that the income disparity gap will increase globally, hence, consumers will be more price sensitive on their purchases. Consumer habits will change as well, such as online habits will increase, health and safety will be of new importance to individuals and companies as well. New behaviours will emerge when it comes to job seeking, learning new skills, focusing on sustainability which will not shift to a social and an economic focus, health and wellness at the expense of environmental sustainability, data privacy will also change the level of comfort of consumers. With all of this, from the start there was a plan for the recovery and retool phases, where, the first step was to protect and stabilize employees and customers. Second, how to prepare ourselves to mobilize a recovery and thirdly, how do we act in the new world and how we retool ourselves. These cycles have an effect on companies as now they see what is critical to their operations and what can be replaced and reshaped to have a more flexible and stable internal change. Finally, the five big themes to retool cost structure for the new normal are: simplicity for the highest value; automation and digitization to improve efficiency; modern workforce to have a diversified talent pool; visibility and accountability to enhance cost accountability; and lastly, operational resiliency to lower total cost of ownership.

Our third panelist was Fabio Pommella who spoke about his experience at whirlpool and adjusting their strategy based on the monitoring they did of their facilities in China. Fabio explained how their operations in China underperformed during the first quarter, hence, a strategy needed to be prepared for EMEA through the observation of the other region’s experience. Based on the real economy, during the short term period their products have certainly been affected by the Pandemic. He has observed that people are starting to purchase products in a different way and that the consumer behaviour will certainly have an effect on various sectors such as theirs. Due to the drastic consumer behaviour change, manufacturing stopped for them in some countries which gave them time to reorganize their operations to adjust and restart work in a safe manner. It was stated that a lot of modification on the production cycle was done in Poland, for example, the reorganization of shifts and being able to move across different departments by having safety protocols in place for all staff. Currently, every company is investing in R&D, digitization and automation which has an effect on various departments being able to work from home such as procurement. Currently, 40% of their workforce is guaranteed space at the office with a distance between employees, while the other 60% work remotely. It was mentioned that the state of the economy is challenging as governments in various countries act to protect jobs and expand social tools to reduce a deep crisis and maintain job safety. This is crucial as if people start losing their jobs then they can’t have money which then leads to lower spending as there is less cash flow moving around the economy. All in all, the current situation will remain as something to stay in the books, where new trends will emerge such as contract negotiation with customers and supplier, approach to sales will be different with less contact,

Increase in expenditure on digitalization, remote working will increase and many more. This to say, only companies who are agile and adapt to drastic change will emerge as winners post-pandemic.

Our last speaker was Przemysław Kania who started the conversation with their ability to have 99% of their staff working from home since the beginning of March. Przemysław was impressed from his observation how most companies have been able to switch to a work from home environment quite smoothly, which was not expected due to the fact that many companies have not been prepared before the pandemic emerged. A trend he has seen was how people have learned how to work together across companies relatively fast by doing business and transactions digitally. CISCO themselves has seen a major spike in usage in communication and security as well, where in Poland it has grown at an immensely fast pace. Another trend which was observed was the fact that many companies are not planning to get back to a traditional work environment post pandemic, where many companies expect to go online or have a hybrid style of work between the office and home. Yet, to go hybrid, there will have to be serious investments put into cybersecurity, and this can pose a challenge. Also, automation is going to be a huge investment for many companies, due to having to learn how to be both flexible and resilient with the new normal. It was also mentioned how cloud storage is changing drastically in Poland which also falls under flexibility and resiliency. If companies want to reach a certain level of hybrid work short term thinking will need to be set aside and long term digital investments will have to increase in both IT and cybersecurity.