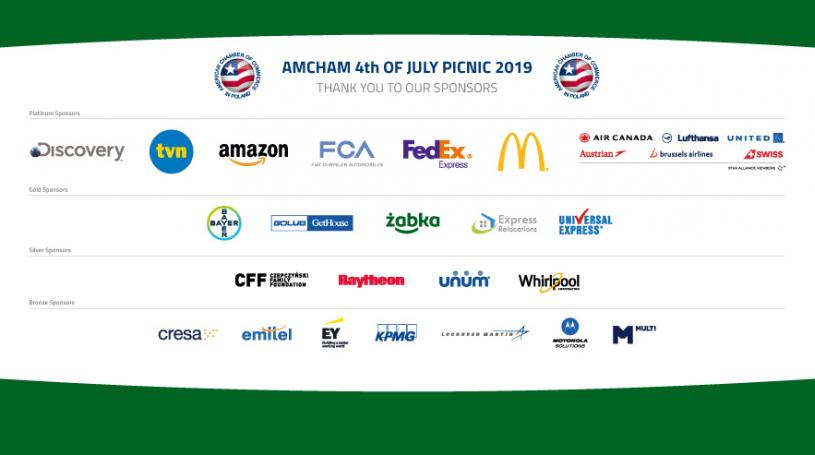 On June 29th, over 1000 AmCham members along with their families and friends joined the U.S. Deputy Chief of Mission, Bix Aliu, AmCham Chairman Tony Housh, and the AmCham Board, as well as representatives of business and politics at Łazienki Królewskie in Warsaw to celebrate not only U.S. Independence Day, but also 100 years of U.S.-Polish relations. In his welcome speech, DCM Aliu emphasized the confluence of our historical experience and expressed his faith in further cooperation. He also emphasized the heroics of Tadeusz Kościuszko and Casimir Pulaski in fighting for both Poland and The United States.

The official start of the picnic commenced with the traditional presentation of the colors by the U.S Marine Corps, and both American and Polish national anthems were performed by Warsaw University Choir.

The event featured Gabi Drzewiecka from TVN hosting the evening and attractions like Cheer Angels Cheerleaders dance show, a live practice by the Mets – American football team and live music by Trace and Mike Gowin & The Wolverines.

We hope that everyone found something engaging at the picnic. Adult participants spent time socializing and tasting food provided by the Sheraton, Marriott, and Żabka or drinks from Jack Daniels, Perła and Barefoot. The young ones played at the Kids Corner sponsored by Universal Express and Express Relocations. The kids enjoyed face painting and tattoos provided by FedEx and played with bubbles with Ronald McDonald. Amazon had kids reading and coding with fun games that resulted in them winning various prizes. TVN and Discovery brought VR headsets, taught eco-art activities and Masterchef finalist “Lorek” led culinary workshops. Bayer provided educational workshops that included VR and an age simulator. CFF and Unicef had competitions in which the kids received ABC Economy books.

To go along with an ECO theme, balloons were biodegradable, Jack Daniels repurposed aluminum cans for plants, Żabka recycled metal and glass bottles, and the Sheraton catered using eco-material.

The most highly anticipated event of the night was the announcement of the AmCham Charity Raffle winners. This year’s grand prizes were sponsored by Star Alliance who gave away six round trip tickets to the US. We would like to thank all the companies that donated 200 wonderful prizes for our raffle. All proceeds support our charity fund. This time we raised money for the Ronald McDonald Foundation and Save Kids with Cancer Foundation. The Picnic ended with a magnificent and spectacular laser show.