On Wednesday, March 3, AmCham had the pleasure to host four panelists during our March Monthly meeting entitled “2021 - Returning to growth and the new market reality in a post-Covid-19 world" that Tony Housh, AmCham's Chairman, moderated.

The discussion started with a brief picture of the current situation in GDP changes. Mr. Czerniak said that Poland had done quite well. First of all, Polish exports did relatively well in 2020 with a minimal decline. During the lockdown, Polish manufacturing output was one of the largest in the last decade. When it comes to imports, they were also in decline due to the value chains being affected, especially from Asia, such as raw material and finished goods that were disrupted at the start of the pandemic. The expert added that Polish consumers tend to turn to local goods and services during crisis times, positively impacting domestic production and local service providers. In his opinion, incomes have been growing even as high as 9.8%, which is astonishing in Poland increasing purchasing power when it comes to consumption and the low unemployment rate helping in that aspect. Moreover, the government was extremely helpful in containing the decline of the economy, especially at the beginning of the pandemic with programs such as tax credits and tax postponements.

Mr. Ciołkowski presented the perspective of customer spending. He explained that he sees four phases from the start of the pandemic up until its end. Phase no. 1 is a containment - this was the shock phase where our everyday habits have been suddenly disrupted, creating huge uncertainties for all citizens, businesses, and governments. Then, we moved to phase 2, which was stabilization. We are still in this phase as this is the restrictions phase where we were in lockdowns, where we are still restricted from walking the streets without masks, we are not able to do all the activities we are used to, such as going to the gym. In the normalization phase, which is no. 3 in a row, we will implement technology in our everyday lives, such as online banking, holding fewer physical cash, using e-commerce for purchases, communicating via channels such as Webex. This phase will also see an increase in medical research needs such as vaccines or treatments against outbreaks. Finally, the growth (phase no. 4) would either be a total return to how things were pre-pandemic or already have medical research to treat the current disease with minimal impact on an individual's health or businesses going through another lockdown.

Then, Mr. Sikora started by saying that 2020 was the first decline in the 30 years of Poland's economic transformation. The pandemic was undoubtedly a surprise for all as it hit the economy and lasted longer than expected. Yet, during the pandemic, when it comes to the transaction market, he said that investors on the stock exchange were quite active in 2020 compared to the previous year. He gave the example of allegro having its IPO on the stock market, being the second-largest IPO in Europe in 2020. Mergers & acquisitions had an excellent year as many transactions have been seen, such as Play being bought by the French in the telecom sector. He emphasized that 2020 was much more prosperous than 2019 with such transactions as Poland followed global trends. It was also mentioned that the pandemic had given returns on investment capital to some sectors, such as the demand for online meetings for digital companies offering such a service, renewable energy, and not just state champions but also the private sector. Finally, it was mentioned that many people who have invested in Poland in their youth years 30 years ago are now reinvesting in the economy 30 years later due to their success as early investors during the country's economic transformation in the 90s.

Ms. Przeździecka was asked about the "New Deal" proposal from the government. She answered that people fear the word “new” now as the term "new normal" kept being repeated throughout the year with little acceptance from people who refuse to admit that their reality was disrupted abruptly. Concerning the critical market attractiveness, she mentioned labor and specifically labor productivity being the crucial issue in recovering its competitiveness. It was emphasized that there need to be a new scheme for education starting from a young age and programs for adults, who need or are forced to change career field.

To improve competitiveness, we need to invest in human capital. It was said, the Polish economy can only grow if we go in that direction henceforth. Greenfield investments and re-investments will increase our capacity to train a modern labor force to work on various new projects that will attract more foreign capital to Poland. Finally, she emphasized the importance of energy transformation in Poland, as a priority for Poland and the EU since the launch of the "Green New Deal" to transform the infrastructure for more sustainable energy and cleaner air quality for its population. Although, Warsaw and Wroclaw are seen as the future cities in 2021-2022 being in the ranking of top 25 “Global Cities of Future” by fDi Intelligence agency. At the first sight, they are both ranked so highly thanks to cost-effectiveness and business friendliness. But, if these cities are to increase foreign capital in the future, they need to work on the poor air quality, which could impact their attractiveness for busines. It would be interesting to combine social benefits with business goals, which is in line with the idea of sustainable development. It is worth returning to the model of public-private partnership, which has not been very popular in Poland recently.

Regarding technology and consumer/client behavior, Mr. Ciołkowski emphasized the importance of technology in the last year on all parties at the individual and the business level. We were all forced to adapt to technology, that we liked it or not. Hence suddenly, people have increased their level of tech-savviness in a brief period. This certainly was a significant shift as it forced people to learn how to use mobile banking and other ways of using technology in their everyday lives.

Mr. Czerniak said about the political landscape and government strategy affecting the economy during the next 24 months, where he answered that forecasting Polish politics is becoming more difficult with time. When it came to supply-side shock, the government was forced to lock some businesses up, affecting their cash flow and having to bootstrap to save their business from collapse. He mentioned that the government should sustain entrepreneurs who got hit hardest by the pandemic’s lockdowns on their particular companies within the last year and identify the companies and the entrepreneurs struggling to get through the pandemic, which should be on the government's priority list. It was emphasized that no particular branch should be looked at; instead, the various entities from all branches should be identified and assisted where it is essential to protect the capacity of these businesses until we return to some form of normal.

Ms. Przeździecka was then asked what she sees as vital for Poland to focus on to be competitive in 2021 and beyond, which was answered by human capital and energy. Both those factors should be of high focus to maintain the country's attractiveness; hence, why infrastructure is something we need to keep in mind as we have done relatively well in the last 30 years, but we still have many challenges with infrastructure if we want to go through a total transformation. She then jumped on foreign investments, which are very regionally focused, creating challenges in the country. It was said that some parts of Poland have significantly more foreign capital flowing in their region than other parts that lack it. Therefore, this is why Ms. Przeździecka emphasized infrastructure in developing transportation routes via rail and road within the country. Finally, when it came to the topic of existing foreign businesses, we have seen that Poland's investment climate has been great in the last 30 years, yet we must keep in mind that proper legislation is the only thing that will keep these companies in the country as appropriate legislation creates stability for its investors. Foreign investors want absolute transparency, which is crucial for their development, where without it, there is no room for further growth if the business starts having doubts and uncertainty.

Mr. Sikora was then asked to assess Poland's investment climate outlook and what needs companies have to develop. He answered that companies are concerned about Poland's future due to some anomalies, such as the government creating an environment of uncertainty and reducing climate confidence. This is mainly due to the taxation system. Companies are not just concerned about the new taxes being implemented; they are more worried about the tax system's complexity. When it comes to the pandemic that is more of an external factor they have no control over, it concerns them, but it is something they find ways to adapt, but anything in the legislature of implementing new taxes in an already complicated tax system is something that needs to be kept on a watch. When he was then asked about the lessons learned from the last year, he answered that he believes we are experiencing a K-shaped recovery and explain that not everyone will come out strong from this pandemic. The medical sector and telecom are on the upper K as they have gained a lot from the pandemic as people adapted to technology, and more money is being put in medical research during the pandemic to fight it and vanquish it. But some sectors tend to be in the lower K as we have seen trends where there is a decline in expenditure in industries such as travel and tourism, which can take a much more extended period to recover as people regain confidence in traveling safely. He then brought back the topic of company concerns where it was mentioned what is holding companies from increasing credit loans is the complexity of government regulations, the waves of the pandemic where we see an increase in infections, and vaccinations which are not at the same level as the UK or Israel, which have shown significant progress in fighting the pandemic. Therefore, to see any form of normality, we have to increase vaccination capacity currently seen in Israel and the UK. Finally, a significant concern for him is something to potentially be implemented this year where he said that the banking system in Poland was the most vital element of growth in 30 years, but at the start of 2021, a court decision has created a black swan which could create a risk that the banking system fears. This risk is the supervisory authority, which is to have the Supreme Court decide on a subject that can make banks lose millions, affecting the country's entire business ecosystem. If it is to be implemented, the market is certainly not ready for it, and this can become a surprise for all and certainly needs to be monitored.

At the end, all panelists pointed out the issue we should keep a close eye on during 2021. Mr. Czerniak mentioned tourism, not just tourism for vacationers but also business travel, as various entities have been hit on this front, such as accommodation, tourist services, and restaurants where no business meetings can be conducted at a lunch table. Ms. Przeździecka said ‘people’ - consumers as the ones who drive the economy with expenditure; if they start feeling uncertain, they stop spending, slowing down the economy. People as a society are the ones who impact both businesses locally and globally, and we have to keep that in mind. Finally, people as a labor force, which availability, productivity and quality will drive the economy. Mr. Ciołkowski said that it would be technology as companies need to have good judgment in choosing what should be developed in-house and what should be outsourced when implementing it. Concluding, Mr. Sikora suggested by keeping an eye on the country's inflation and its digital transformation. 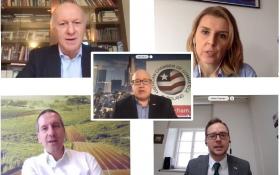